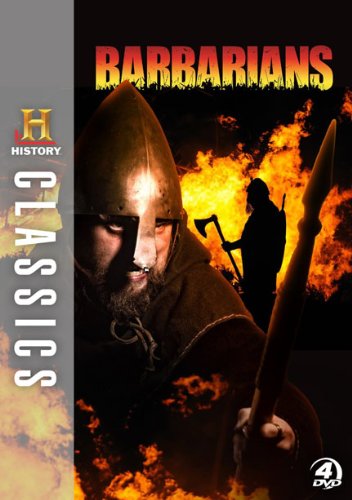 History will never forget their reign of terror.

For nearly a millennium, barbarian hordes rose up and swept across Asia, Europe, and Africa, pillaging towns and sacking empires. But who were these barbarians, seemingly devoted only to violence and destruction, their language the battle-axe and mighty sword? In Barbarians, HISTORY explores the origins of the Huns, Goths, Vikings, and Mongols. Shot on location, Emmy® Award-winning documentarian Robert Gardner (Islam: Empire of Faith) uses in-depth interviews, thrilling reenactments, and narration by Clancy Brown (The Shawshank Redemption) to bring to life the powerful leaders, military strength, and overwhelming drive that kept empires on three continents in terror for centuries.

Then, in Barbarians II, HISTORY follows four of the most fearsome tribes: the Vandals, the Saxons, the Franks, and the Lombards, as they cut a swath of destruction through the heart of the Roman world. Produced in High Definition, Barbarians II recreates the world of these invaders through even more intense stunts, large-scale battle re-enactments, and a fast-paced, exciting narrative. The whistle of the war axe and the clank of the shield will ring in viewers' ears as these four programs bring the epochal clash of civilizations to life as never before.

This HISTORY CLASSIC set contains all episodes of both critically acclaimed series, BARBARIANS and BARBARIANS II.

BARBARIANS
DISC 1: The Vikings / The Goths / Bonus
DISC 2: The Mongols / The Huns / Bonus

TV shows and movies just for you

This week's top TV and movies

IMDb helps you select the perfect next show or movie to watch.
Watch Guide
Most Popular

Celebrity interviews, trending entertainment stories, and expert analysis
4:01
The Rise of Emmy Nominee Evan Peters
3:34
Everything We Know About 'Spider-Man: No Way Home'
3:49
The Rise of Beanie Feldstein
2:45
September's Most Anticipated Movies
2:54
5 Questions With 'Shang-Chi' Director Destin Daniel Cretton
3:51
From "SNL" to "Ted Lasso": The Rise of Jason Sudeikis
3:44
Tom Ellis Reveals the Prop He Snagged From "Lucifer"
4:22
Womenfocus WallÃÂ HangingÃÂ Tapestries, The Iron is Ironing Cl
1:20
What to Stream on Netflix in September 2021
3:05
The 'Shang-Chi' Cast Describe Day One on Set
2:27
Julianne Nicholson Reflects on "Mare of Easttown"
1:48
3 Innovative Shows the 2021 Emmys Missed
2:13
Why Mary Elizabeth Winstead Loves Action Roles Like 'Kate'

Coming soon to theaters (US)

Please enable browser cookies to use this feature. Learn more.