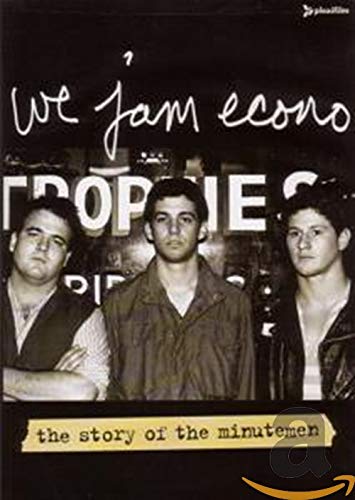 WE JAM ECONO - THE STORY OF THE MINUTEMEN is the acclaimed feature-length documentary on the too-brief life of one of the most revered, intriguing, and inspired American bands ever. At the heart of their story is the immeasurable personal and musical bond between bassist Mike Watt and singer and guiatrist D. Boon. Childhood friends, their unbridled creativity and political views were the foundation of this groundbreaking band which refused to be categorized as Punk.

The film weaves together personal tales from Watt and drummer George Hurley with archival interview footage of the band and rare live performances. New interviews with over 50 musicians, artists, journalists, and friends help tell the Minutemen story, from their humble beginnings in the harbor town of San Pedro, California, to the tragic 1985 death of D. Boon in a highway accident in the Arizona desert.

Chances are if Alt-Rock changed your life in the 1990s you have the 1980s band The Minutemen to thank. And for those of you who missed out when The Minutemen were at the top of their game, you're in luck. We Jam Econo - The Story of the Minutemen is the long-awaited documentary of this wildly eclectic, seminal indie punk band. San Pedro High School graduates and long time friends D. Boon (guitar), Mike Watt (bass), and George Hurley (drums) formed The Minutemen in 1980 in the wake of the late seventies punk explosion. The Minutemen's trademark sound was a unique blend of punk, funk, classic rock riffs, mexicali rhythms and jazz beats sprinkled with a healthy dose of left wing politics and angst. These genres were often blended together into the same song and played in rapid fire bursts clocking in at one to two minutes tops. Their relentless touring and recording helped The Minutemen build a solid underground following while winning praises of music critics everywhere. After releasing their magnum opus Double Nickels On the Dime (1984) and opening for REM in 1985, the Minutemen were quickly rising to the top of the American Underground/College Rock heap. It looked as though super stardom may have been on the horizon for the boys from San Pedro. Sadly, the ride would be cut short when front man D. Boon died in a car crash on December 22, 1985. Culled from hours of home video footage, live concert footage and new interviews with Mike Watt and George Hurley, We Jam Econo chronicles the band from their early teen years, the band's roots in the 1980s Southern California hardcore scene, right up to the tragic death of front man D. Boon. We Jam Econo also includes loads of interviews from fellow musicians that read like a "who's who" list of the 1980s punk/ hardcore scene including the guys from Black Flag, X's John Doe, Minor Threat/ Fugazi's Ian MacKaye, Hüsker Dü's Greg Norton and Grant Hart, Flea from the Red Hot Chili Peppers, Dead Kennedys' Jello Biafra, Dinosaur Jr.'s J. Mascis, Sonic Youth's Thurston Moore and Lee Ranaldo, among many other admirers. The extras on this DVD include deleted scenes and extended interviews, their music videos and a complete band interview from 1985. By far the best extra on this set are the three complete live Minutemen performances from 1980, 1984, and 1985. --Rob Bracco

A valentine to the band and D. Boon's memory. They're immortal now, and that's as it should be -- Seattle Times

The band was driven by large passions and a keen, questioning intelligence, qualities that Boon himself embodied. -- Spin

Their idealism, their humor and decency is spellbinding. -- New York Times